I am broadly interested in the mechanisms underlying forest community assembly and change. Climate and fire regimes are two primary drivers of forest dynamics, with fire providing the proximate mechanism for vegetation change and climate dictating long-term trends. Interactions and feedbacks between climate and fire can lead to ecological shifts over a range of spatial and temporal scales. My research focuses on understanding how climate and fire drive changes in plant diversity and demography, forest structure, and ecosystem processes across these multiple scales, by combining large empirical and spatial datasets, experimental manipulations,  statistical and demographic modeling, and other approaches. 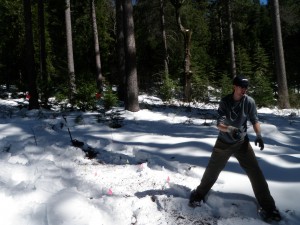 I am particularly interested in the disturbance ecology of North American forests, including both overstory and understory responses to fire and forest management. Disturbance in forests alters understory microclimate, and as such the importance of disturbance and climate in structuring understory vegetation are closely related in these systems. Much of my research has focused on the interplay between vegetation, fire, forest management in frequent-fire forests, ranging from the US southeast to mountain west.

I am currently a Research Eologist with US Geological Survey New Mexico Landscapes Field Station. Ongoing research projects include:

As a postdoctoral researcher with the Department of Environmental Science, Policy and Management at UC Berkeley, I worked in collaboration with Scott Stephens and others. Research projects included:

As a postdoctoral researcher with the John Muir Institute for the Environment at UC Davis, I worked in collaboration with Malcolm North and others from the US Forest Service Pacific Southwest Research Station. Research projects included:
1) Evaluating methods for inferring past fire regimes.
2) Effects of different fuel treatment strategies on potential fire behavior and wildlife habitat in the Lake Tahoe basin.
3) Effects of salvage logging on understory vegetation on the Rim Fire and King Fire.
4) Modeling the recent drought-related forest mortality in California as a function of long-term climatic water deficit and forest stand structure.

Treated forests that subsequently burn in wildfire thus constitute an intermediate disturbance class between unmanaged, fire-suppressed forest stands (low disturbance) and those same forest stands after high-severity wildfire (high disturbance). We described the plant community response to this disturbance continuum using information on the biogeographic origins of the understory flora, along with information on plant functional traits. We also documented an intermediate disturbance peak in understory diversity that operates at multiple scales. This work is currently in review.

Montane regions worldwide have experienced relatively low plant invasion rates, a trend attributed to increased climatic severity (e.g. deeper snowpack), low rates of disturbance and reduced propagule pressure relative to lowlands. Manipulative experiments at altitudes above the invasive range of non-native species can clarify the relative contributions of these mechanisms to montane invasion resistance, yet such experiments are rare. We examined the importance of these factors in limiting montane invasions, using a field transplant experiment above the invasive range of two non-native lowland shrubs, Scotch broom (Cytisus scoparius) and Spanish broom (Spartium junceum), at Blodgett Forest in the rain-snow transition zone of the Sierra Nevada. Establishment of both species was most likely at intermediate levels of canopy disturbance, but at this intermediate canopy level, snow depth had negative effects on winter survival of seedlings. We used matrix population models to show that reduced snowpack should lead to higher population growth rates for both species. Many treatment combinations had positive growth rates despite being above the current invasive range, indicating that propagule pressure, disturbance and climate can all strongly affect plant invasions in montane regions. This work is currently in review.

With support from the Joint Fire Science Program Graduate Research Innovation Award, I investigated the effects of fire severity and canopy cover on post-fire snowpack depth, discovering that during a low-snowpack year snowpack depth was maximized in openings within forest stands that were unburned or burned at low-severity, while decreasing in larger patches of high-severity fire. Ongoing work in this area aims to utilize LiDAR to generate fine-scale spatial maps of snowpack and relate that to fine-scale heterogeneity in forest cover in landscapes such as the Illilouette Creek Basin of Yosemite National Park where active fire has restored heterogeneous forest cover.

I have long been interested in reviewing the evidence for how shrub layers in forest understories influence regeneration of overstory trees. Some day I may write this up!

For my Masters degree in Plant Biology at the University of Vermont with Brian Beckage, I studied the interaction between fire and the invasive shrub Brazilian pepper in pine rockland savannas of southern Florida. We documented a positive feedback between invasion density and fire suppression by Brazilian pepper thickets, and showed the importance of frequent fire early in the invasion stage to prevent establishment of large populations.